So now it’s time to compile the annual list (been doing this since 1995…and it was much easier when I could just record it for a podcast). Keep in mind that my choices are limited to movies I saw in the theatre only. Movies that I saw on DVD do not count since there’s still something to be said about seeing a film in front of the big screen and with a live audience. Also, before I am lynched, remember that I didn’t see all of the big movies of 2009 yet…I’ll see Avatar as we move into 2010 and some just missed me completely.

As I’ve grown older I know longer try to influence people with what they should interpret as a “good” or “lousy” movie. Please don’t take offense if I rip on a personal choice of yours…it’s more that the movie was not my “cup of tea”.

I’m picking my top ten based on the criteria: was I entertained, was I entertained enough to see the movie again or want to own it on DVD, did the movie make me think about it after it had ended, did I feel like the movie delivered something original, was the movie something I would recommend to my friends, and how did the crowd interaction help liven that particular movie-going experience.

Y BLOODY VALENTINE 3-D – Sure this will be when some people stop reading and throw all my credibility out the window but dammit, I had a fun time at this movie. The 3-D boosted the experience to a new level for me as I hadn’t seen a 3-D movie in decades (I think the last time was 1985 with Metalstorm)…but man when that first eyeball shot out at me…AWESOME! What I appreciated with MBV-3D was the fact that the film makers tried to elevate the genre and not just produce a slasher body count movie…but also a decent mystery. The effects and gore are great and there’s a subtle homage to the original 1979 MBV which almost treats this one as a sorta sequel (and the creators wisely chose to deliver a different twist on the killer’s true identity).

#9 – HARRY POTTER AND THE HALF-BLOOD PRINCE – I have read all the Harry Potter books. When I read them, Harry Potter and the Order of the Phoenix was my least favorite…and yet that movie entertained me like no other. Harry Potter and the Half Blood Prince was one of my favorite books…and yet the movie seemed to miss something. I guess what can excite and entertain on the printed page doesn’t always translate to the big screen. The cave finale was gangbusters in the novel…but in the movie it comes off as a slightly suspenseful moment and nothing more. Harry’s dealings with Snape were also wonderful to read…but on the screen…so-so. Still it was a good movie…but I was expecting something great and didn’t get that. Certainly this was one of the calmer and weaker of the Harry Potter movies.

#8 – SHERLOCK HOLMES – While this is a pale imitation of the Sherlock Holmes character, I guess Hollywood was at least attempting to do something new. I couldn’t get beyond Robery Downey Jr’s performance though…to me it was just Downey playing Downey. The movie is high on frenetic energy and action and lower on plotting and mystery. But when all was said and done…I still had a good time…but I’d rather rent and watch Young Sherlock Holmes which I felt was a superior Hollywoodization of the Doyle character.

#7 – PARANORMAL ACTIVITY – Much like Blair Witch Project we have here

a movie that many people scoff at as not being scary. However, Paranormal Activity is one of those “think grenade movies”. I saw it, enjoyed it. Then days later I found my brain returning to some of the creepy moments of the movie and saying, “What if that happened to me?” Then the goosebumps start. That to me is the sign of a good scary movie…it’s not about the cheap scare but about the long tension and what remains with you after the initial experience as ended. Paranormal Activity also achieves a spooky ending that doesn’t follow the clichéd “it all must be happy” formula…anything but. As far as cheap-indie 1st person movies go…I’m impressed at what the film makers were able to deliver to me.

#6 – THE HANGOVER – I really liked this movie…however it’s not as funny the 2nd time I saw it (at home) and that surprised me. Maybe this is a movie that the “thrill of a live audience” brings a lot to the table. Still, when I saw the movie it made me laugh a lot and delivered plenty of Non-PC humor…something I always enjoy. Still it was the best comedy of 2009. 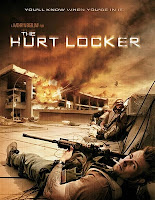 my Top 5 fall into the genre) but there was a realism in The Hurt Locker that really pulled me in. There’s some terrific film making that takes place in this movie that had me 100% believing that this is what the Iraq experience is really like. It certainly made me never want to have to defuse a bomb or duel with a sniper in the open desert. This is all topped by a superb performance by Jeremy Renner (who I have been a fan of since SWAT) – mark my words Mr. Renner will be busy actor in Hollywood over the coming years. Maybe due to the material or marketing many people missed The Hurt Locker, but it’s a drama that you should not let skip you by.

– UP – I’m not a big fan of the kiddie fair movies. However about 2 minutes into UP I realized that this was not a kiddie movie (maybe in the visuals and presentation it is, but the plotting is for adults) and I really let myself get pulled into the plot and world that Pixar were presenting. I’m also a sucker for the Hollywood formula of old cranky mentor and young envious mentee…that gets me at the heartstrings every time. UP was certainly the most emotional experience I had in the theatre in 2009. Plus it's cool to see that Ed Asner is still working in Hollywood! “SQUIRREL!”

#3 – INGLORIOUS BASTERDS – When I first saw Inglorious Basterds I was expecting something closer to The Dirty Dozen. What I got was

something – ORIGINAL. Hats off to Quentin Tarantino for delivering a fun and intense war movie that is nothing more than Tarantino paying homage to WAR MOVIES (yes, he throws history completely out the window). Once you get past the heavy violence and the classic haminess of Brad Pitt, Inglorious Basterds delivers three of the most tension inducing moments that I have seen in a movie…frankly anytime someone drinks a glass of milk in this movie…I was clutching the arm rest. Pay attention to the original ways that Tarantino manages to shift from subtitles to English without breaking a moment of pacing and making the switch relevant to what is occurring on camera. The movie is clearly not for everyone, but I do find it ironic that as Hollywood award season is coming around that it is being recognized. When I saw the movie this summer, I liked it…but then 6 months later I was thinking about it so much that I went out and bought the DVD (something I rarely do anymore) so clearly the ranking needed to increase as well…it was tough if IB would actually be #2. 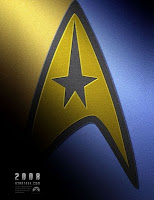 – It’s not just a good Star Trek movie, it’s a good movie! That’s the easiest way to sum up Star Trek. J.J. Abrahams successfully made a movie that paid homage to the entire Star Trek history while inviting non-fans to come along for two hours of entertainment. While all the casting was perfect, I especially enjoyed Karl Urban’s portrayal of Doctor Leonard “Bones” McCoy…spot on. Future film makers should take note…the way to relaunch a franchise is to not alienate the core fan base that love the franchise to begin with. I also had to buy this one on DVD…and had I not gotten married this summer…I probably would have had time to see this multiple times in the theatre. Great science fiction is delivered as the time-travel and multiple time-line dimensions can be analyzed for years.

#1 – WATCHMEN – This was an easy pick. Frankly 2009 was a weak year for movies for me and this was the only movie that got me to pay to see it three times (and buy it on DVD…and then on BLU-RAY). It absolutely blew me away when I saw it on the IMAX. Watchmen is my favorite novel of all time and I lived in fear of it being butchered by Hollywood. However, thanks to film maker Zach Snyder, they got it as right as they could. The movie clearly skews to a select audience, and it’s a thinking persons superhero movie but overall this movie put a huge smile on my face…not an easy thing to do considering the focus is on the end of the world. I know people who liked Watchmen and I know people who hated Watchmen…I loved this movie and if I’m the only one…that’s OK. If you’ve been to my house you clearly know that this concept is one of my favorites of all time…and the movie couldn’t have been any better.


And the annual closing categories… 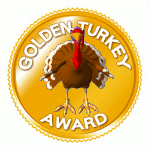 WORST MOVIE THAT I PAID MONEY TO SEE IN 2009: OBSERVE & REPORT…so strange and uncomfortable…and NOT funny.

MOVIE THAT I JUST DON’T GET THE HYPE OVER: DISTRICT 9…seriously…everything in this movie I have seen in plenty of other sci-fi films…it managed to both bore and annoy me and don’t get me started on the ending that I called long before it was “shockingly” delivered.

MOVIE THAT UNSUCCESSFULLY THREW THE ENTIRE NATURE OF SCIENCE OUT THE WINDOW: 2012…oh so bad…someone get Roland Emrich out of Hollywood – STAT! Seriously, once the fault split the supermarker in half…come on man!

BEST DECAPITATION, DEATH BY ESCALATOR, AND HEAD RIPPED OFF BY A TIRE: THE FINAL DESTINATION…in 3-D…and the 3-D was also better than Monsters vs. Aliens.

MOVIE THAT COULD HAVE EXCELLED TO BE A CULT CLASSIC BUT DIDN’T ACHIEVE IT: ZOMBIELAND…Woody Harrelson was good but the movie was fairly bland…and just like District 9…I don’t get what all the fuss is about?

MOVIE THAT NEEDED TO DELIVER SOMETHING NEW INSTEAD OF THE SAME OLD FORMULA: FRIDAY THE 13TH…I went into this with huge expectations…the look was great but everything else felt tired…the producers should look at Star Trek for how to enliven a long running franchise, but I did enjoy the boat and water-skiing deaths.

BEST DEATHS BY CAR WASH MACHINE AND AMBULANCE HIT & RUN: THE FINAL DESTINATION…seriously this was like watching a snuff film in 3-D.

BEST PREVIEW I SAW FOR A 2010 MOVIE: HOT TUB TIME MACHINE…I am so there…and yes it will probably suck but the title and concept crack me up!

Ok, thanks for reading and feel free to share your comments and recommend movies that you think I need to see.