In the 1980's-90's in horror fiction Stephen King, Clive Barker, and Dean Koontz were probably the three biggest names. However, on a tier just below them was Robert McCammon. While many people may not know McCammon's name today, this is partially because he took a self-imposed hiatus from writing for almost a decade.

As a huge fan of his work, it was brutal not being able to read any new material fro

m this incredible writer. STINGER was the first adult novel I had ever read (until this point in my life it was all comic books). At the time (1987?) it seemed like a very mature purchase to buy a book. I remember standing in the Huron River Pharmacy with the latest issues of Teen Titans, X-Men, Spider-Man, Avengers, and Justice League...looking up and seeing this book cover with an alien arm reaching out from the ground. WOW! I had to know what was going on in that book. Needless to say I was not disappointed.

For the next 4 years I made it a point to try and read every McCammon book I could find. Night Boat (zombie Nazis), They Thirst (vampires destroying Los Angeles), Blue World (a solid collection of short stories on par with the best of horror), Swan Song (planet destruction and epic battle of good vs. evil), The Wolf's Hour (werewolfs and WWII) and the list goes on. Later as Mr. McCammon branched out into other genres I would enjoy Boy's Life, Gone South, and Speaks the Nightbird.
Because McCammon is based in Alabama, I never expected to actually meet him. However, he surprised me and offered a book reading and signing yesterday in Ann Arbor, Michigan! My brother and I made the trek over to attend the event. However, we got there a bit early so decided to have dinner at the neighboring TGI Fridays. As we ate I joked with my bro that, "Wouldn't it be funny if Robert McCammon was eating here too." Guess what...he was three tables over! I realized this when I left the bathroom and almost crashed directly into his table! Way cool!
We headed over to the Border's for the signing. I purchased his new novel MISTER SLAUGHTER, got my seat, and decided to use the restroom before the reading started. As I was leaving the stall, I heard two men talking and one man said, "I was going to ask if there were any stalkers in here." Ha-ha! Yep, Mr. McCammon again. I washed my hands right next to him...and was polite to not ask him to shake.
Mr. McCammon th 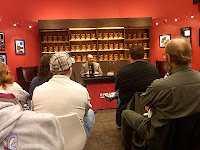 en started his reading with a friendly round of Q&A (I asked the first question), then gave a solid reading of a grim chapter from the new novel (murder, rape, and a villain whom you already want to see meet their comeuppance), and proceeded to sign everyone's books. My brother and I were in the back of the line and besides my purchase, I brought one book from home. It was a hardcover copy of They Thirst that I had purchased on eBay years ago. It was autographed by Mr. McCammon, but up until this point I had no clue if it was legit. I showed the book to Mr. McCammon who chuckled and acknowledged that it was indeed his signature...he then updated it with his new signature (so the book is dually signed).
All I can say is I AM A FAN! Robert McCammon is all class. If you've never read any of his books, I encourage you to give them a try and to check out his website: http://www.robertmccammon.com/. And no, I'm not a stalker...but for one night I just seemed to be in the right place - three times.
Posted by Barrel Jumper 1 comment: