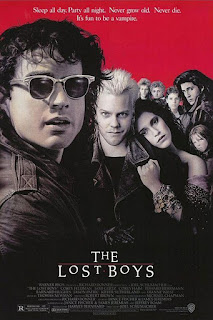 This month’s issue of Horror Hound magazine  (www.horrorhound.com) ran a retrospective on The Lost Boys.  Lost Boys is the 2nd best vampire movie to come out of the 1980’s and one that held some fun memories for me.  To the best of my memory, I recall seeing the movie three times on the big screen.  The first time was in the summer of 1987 with my friend Nusbaum.  He always seemed to know more about movies than I did, kind of like the human Internet before his time, so he dragged me, his unwilling friend, to see it.  The movie blew me away!  At the time this was a fairly original take on vampires.  Gone were the traditions, and many of the myths, to be replaced by a cool look, mean attitude, and insider jokes “Holy Shit!  It’s the attack of Eddie Munster!”  Lost Boys rekindled a love of vampire lore in me that had started in 1985 when I saw Fright Night (the 80’s best vamp offering).
The second time I saw The Lost Boys was in the fall of 1987 when I decided to bring my brother and my friend Gordy, so they could share in the greatness of the film.  On the way out we got cut-off by a car of drunk rednecks which led to an exchange of curses and a seminal car chase (but that’s another story).  We did make it to the movies, and everyone had a blast!  The final time seeing Lost Boys on the big screen was the winter of 1990 while working for the Star Theatre company.  The manager scored a copy as a Christmas Party bonus and the employees enjoyed a midnight private showing.  What a fun night!
So back to 2012 when I finished the informative article, I decided that after twenty years I should probably watch the movie again in its entirety.  Thank you Comcast for providing a free HD version with your wonderful On Demand service.  Thirty seconds later I was taken back to 1987 and the wild party life of an eternal vampire.  I’m happy to report that the movie still holds up remarkably well.  The acting is solid, the pace is brisk, and there’s a good amount of violence/scares mixed with levity.
The biggest weakness of The Lost Boys is always been Corey Haim’s wardrobe (seriously even in 1987…those outfits were considered lame) and the fact that he has a poster of a scantily clad Rob Lowe hanging in his bedroom.  The other issue I have is that the vampires tend to be killed off far too easily.  This problem persists in the 2011 remake of Fright Night as well.  A vampire, a creature of eternal life and thus eternal life experiences, should not be easy to kill.  In fact, it should be such a difficult task that few people have succeeded.  The better episodes of Buffy the Vampire Slayer show how hard it is to kill a vampire like Spike or Angel, even for a superstrong Slayer.  Then there’s the original Fright Night where Charlie Brewster and Peter Vincent toil for almost 30 minutes of the movie battling one vampire before finding success.  That was a memorable fight.  Sadly, 3 of the 4 Lost Boys go out while awake…and far too quickly. 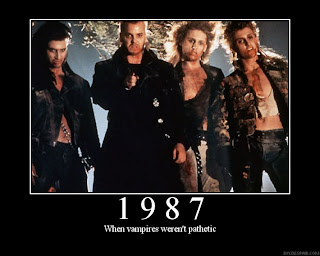 The strengths of The Lost Boys are many.  The action scenes work.  The knowledge of the Frog Brothers stays somewhat familiar with tradition while later accepting that some myths are just that.  Was The Lost Boys the first movie to show such an original "coffin" for the vampires to rest in?  As a teen, that reveal shocked the hell out of me.  The music also sustains being creepy and stellar, I forgot how enjoyable “Thou Shall Not Fall” is to listen to while watching.  And the overall look of the movie was original and trendsetting, before Twilight took all the bite out of what it meant to be an eternal teen vampire.  The Lost Boys gave, and continue to give, the lore of the vampire some serious bite!
Posted by Barrel Jumper No comments: