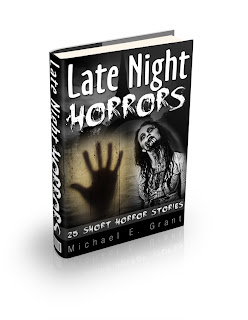 As I said, 2011 hits and thanks to the ever expanding ebook market I was exposed to writers like Michael Crane and J.A. Konrath who both showed that the days of needing a publisher were over.  Thanks to technology writers could seemingly get a good idea uploaded onto the infinite space of the Internet where it would be available forever.  Well, that sounded easy so I returned to the keyboard.  During those first three months I toiled away on numerous horror short stories that would make up a collection I planned to call SIMPLE EVIL.  I was pleased that for the most part my speed in taking ideas and putting them to word hadn’t diminished too much.  My characterization and dialogue were also strong.  Grammar and use of commas…lacking.
The plan was to write a collection of 25 horror short stories.  Then the plan changed.
While writing, I came up with a flash-fiction (or flash fright as I prefer) tale called IN 5OO WORDS which dealt with a pretty foul-tempered piece of white trash who meets the Devil.  The tale would unfold in exactly 500 words.  The first problem was that 500 words wasn’t enough so eventually it expanded to 666 words…seeming to be a natural fit.
Creativity is a tricky thing.  For me inspiration is 99% of the battle.  If I’m inspired then I work to achieve my goal.  SIMPLE EVIL eventually morphed into the much better sounding LATE NIGHT HORRORS.  And with 15 stories complete and over 200 pages written I did what any maniac would do…I set it all aside to tackle a new project.
My inspiration drew me to the story IN 500 WORDS…now titled IN 666 WORDS.  In August 2011 I decided that an entire novella could be devoted to horror short stories that each neatly fit into exactly 666 words.
One year later and my goal was complete.  IN 666 WORDS is now available on Amazon, Barnes and Noble, and Smash Words.  And before I return to my original project of LATE NIGHT HORRORS, there’s probably a lesson to teach regarding the important steps for anyone who wants to publish an ebook and thinks (as I did) that it will be an easy process.
That will be our next entry but until then...if you're interested in reading my first offering...links below...
http://www.amazon.com/dp/B0077DR4PM
http://www.barnesandnoble.com/w/books/1108785364
http://www.smashwords.com/books/view/131218
Posted by Barrel Jumper No comments: