WHO WATCHES THE WATCHMEN? 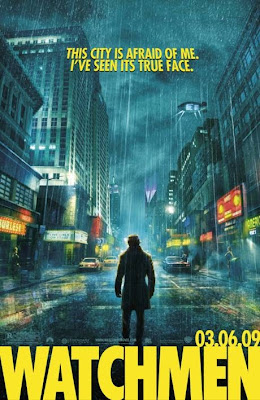 Watchmen is the seminal work of comic book superheroes, one that clearly crosses boundaries into the literary realm and that has achieved world wide critical fame.  The premise holds such an important place for me as a fan that I have put off writing this entry because I knew I could never do it justice nor fully showcase what makes this such a monumental movie for the superhero genre.  This is not just masks and capes but an intense character study surrounded by a complex realistic world that dares to ask, what if superheroes were real?
My first exposure to Watchmen came in 1987 as issue #10 was on the new rack.  Something about the cover called to me and without even looking inside I purchased the book and spent months tracking down issues 1-9 and buying 11 and 12.  Mind you I had not read nor even glanced on the inside of any issue.  Somehow I knew this series was something special.  When I finally immersed myself into the world that Alan Moore (he of the great mind but reclusive smoky pub nature) and Dave Gibbons (artist extraordinaire and hell of a nice guy) created I was blown away.

﻿﻿﻿﻿﻿﻿
I have been a fan of superhero comics since 1975 when my mother purchased me my first issue of Marvel Team-Up while we were on vacation in Ohio (yeah Sea World!).  Masked champions battling the forces of super powered evil is a genre I hold near and dear and by 1987 I was confident nothing could jolt the proud and heroic world of comic books and my imagination.  Then Watchmen destroyed every comfortable corner of the genre.  There was rape, betrayal, failure, impotence, insanity, violence, Nietzsche, global destruction, black humor, time travel, and Richard Nixon all swirling through a complex story and world unlike anything that has ever been created.


﻿
Watchmen is the only comic book storyline I have read yearly (if not several times a year) since my initial purchase.  I own three trade paperback versions as well as the limited edition hardcover.  I have two framed original lithographs of the characters (one adorning my living room in the prime real estate over my TV and the other in my office).  Back in the 1990’s I proudly wore a Comedian button before the masses had any clue what it even meant.  I cherished Watchmen and was confident that it would never be translated into a movie.  And if it was, I was doubly confident the movie would fail (much like the early Sam Hamm screenplay which I read).

In 2009 Zack Snyder proved me wrong by delivering an incredible movie that paid such faithful homage to the comics that inspired it that scenes were taken directly from the book and placed onto the screen.  I saw Watchmen three times at the movies, and the IMAX version took me to an entirely new level of appreciation.  Obviously new items were added to my household collection including all of the deluxe books documenting the journey from page to screen and the coup de grace an autographed poster from Zack Snyder himself (Mrs. Jumper has connections via Snyder’s producing friend Wesley Collier).


All this writing and you can see I’ve barely commented on the movie.  How can I possibly do justice to a book and movie that excel so high in the genre?  Fans are too brutal with the movie and it is vastly underappreciated.  Some comment that it is merely the story lifted from the comic.  Others complain that the 3rd act veers to far from the source material.  I agree with both views…but as a positive.  Watchmen is essentially the comic book on the screen, but why is this a bad thing?  That’s what people want to see!  They want the characters and situations that made ’s original work so breathtaking.  As for the ending, it is different but that is because it’s a noticeable improvement.  For all of my love of the comic books, the ending has many problems (including the Magoffin alien monster which never felt right).  The movie wisely transfers the threat to Dr. Manhattan in a logical way that feels right in every aspect.


Does Watchmen have problems?  A few.  The only real issue I have deal with Silk Spectre’s initial scene where you can see actress Malin Ackermann must have been on her first day of shooting because her delivery is stiff and unbelievable (but she improves over the course of the film).  The only other issue I have is with the casting of Ozymandius.  Matthew Goode is a solid actor but completely wrong for the role and never delivers the sense of single-minded intense intelligence that is necessary for the role to be accepted.


Luckily the movie makes up for these areas by delivering three outstanding performances from Patrick Wilson (Nite Owl), Jeffrey Dean Morgan (The Comedian), and especially Jackie Earle Haley (Rorschach, who is a make or break the movie character).  The CGI and time-travel essence of Dr. Manhattan is also a great asset (and they went full nude, props for the bravery when the film makers knew a blue penis would cause the juvenile members of the audience to laugh).  The three hour run time flies by and hits every area of the comics that you would expect.  The flashbacks to the Minutemen are superb, the action moments are solid, and the effects and costumes do justice to the property.  Although some people mock the “wire fu” combat at the conclusion when Nite Owl and Rorschach battle Ozymandius, I enjoyed the fact that they were at least allowed to be heroes who battle for the human lives at stake (a step up from the pathetic one page pummeling they took under ’s script).

I would be remiss if I didn't also acknowledge the best five minute opening segment in history that encapsulates the entire world over three decades and allows the viewer to fully understand what is taking place on this "Earth".  The soundtrack choice of Bob Dylan's "The times they are a changing" is perfect as we are treated to an amazing visual display where words are not necessary.


As great as the movie Watchmen is, the director’s cut DVD with commentary is even better.  Both comic and movie are important to me on many levels.  I would have thought they would both be #1 on my list for all time, but then in 2012 Joss Whedon delivered Avengers which captured a different aspect of the superhero genre that is more welcoming to a general audience and thus we arrive at movie #1…