In November 2011 Subterranean Press will be releasing a limited edition follow-up to The Wolf's Hour.  Robert McCammon's novella and short-story filled continuation with the Michael Gallatin character is titled: THE HUNTER IN THE WOODS.  Check out their website...www.subterraneanpress.com/ 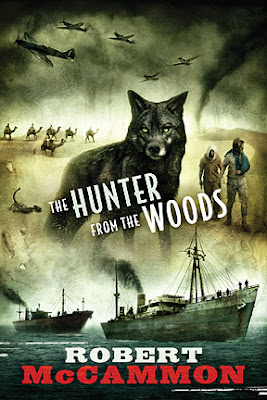 One of the novellas to be included in this new collection is THE ROOM AT THE BOTTOM OF THE STAIRS which was just released as a free (WOW! Don't hear that often) ebook download.  This 30,000 word story takes place after the events in The Wolf's Hour and really shows that McCammon is still writing at the top of his game.

Where as The Wolf's Hour was a superb spy-horror-action story.  The new novella is much more of a drama-romance story.  Shocking to see the change, but it works remarkably well.  There's so much fun to the Michael Gallatin character, and a richness to the trials and tribulations he faces on his newest mission behind enemy lines.  McCammon is always excelled in creating strong villains and "punishing" surprises, and this novella continues the trend.  The final action set piece is both exciting and terrifying in its brutality.  Astute readers will understand that the novella's title is both the setting of the climax and an allegory to a place Michael fears he'll one day see.

I loved reading THE ROOM AT THE BOTTOM OF THE STAIRS.  I hope McCammon continues to release his past works on ebook formats as my Kindle gets far more attention these days than any books on my shelf.  If you're interested in ordering THE HUNTER IN THE WOODS or snagging the free novella download look here... http://www.subterraneanpress.com/Merchant2/merchant.mv?Screen=PROD&Store_Code=SP&Product_Code=McCammon05

If you've never read anything by Robert McCammon, check out some of his best work: BOY'S LIFE, SWAN SONG, BLUE WORLD, SPEAKS THE NIGHTBIRD, STINGER, and MINE.  The author's website...http://www.robertmccammon.com/

Keep up the great work Rick!

Email ThisBlogThis!Share to TwitterShare to FacebookShare to Pinterest
Labels: robert mccammon, subterranean press, the hunter in the woods, wolfs hour

In the late 1980's I discovered Robert McCammon's work through the excellent horror-sci/fi novel STINGER.  It didn't take me long to devour THEY THIRST, THE NIGHT BOAT, BLUE WORLD and practically everything he wrote.  Reading the works of Robert McCammon is like seeing a Saturday matinee cliff-hanger. THE WOLF'S HOUR (first published in 1989) was the 6th book by McCammon that I had read at the time.  Initially I chose to pass it by because the plot seemed a little too bizarre for me. How cool can a werewolf book set in World War II be?  But, I gave it a chance and discovered the answer...VERY VERY COOL! Since my first reading of this awesome novel, I have gone back to it numerous times for the sheer level of character depth and ambitious action sequences.

McCammon tells the story of Michael Gallatin in two parts. Part one deals with the early years of werewolf life and addresses the myth/fact areas of the legend that will be necessary for the novel. Part two is sheer action as Gallatin goes on a mission deep into Nazi Germany. The stories are told concurrently and intertwine throughout the novel. The book is a study in duality - good vs. evil, man vs. wolf, action vs. horror...and through it all we are left to ponder the question, "What is the werewolf in the eyes of God?"

As with his other excellent works  McCammon provides a strong protagonist and more importantly an equal antagonist. The Wolf's Hour gives us three villains that the hero must deal with: Colonel Jerek Blok, his muscular henchman "Boots", and big-game hunter Harry Sandler. Waiting for these characters to meet and battle really made the read thrilling. McCammon starts the ride in motion on Page 1 and takes us through more suspense and action than we could get at any theme park. The book is sheer kinetic energy. And, just like the cliff-hangers of yesteryear, McCammon puts our hero into numerous perils in every single chapter. Whether it is battling a Berzerker wolf in the forest, fighting off Nazi's on the roof of the Paris opera house, struggling for survival in a Nazi death camp, or battling a vicious hunter on board a literal locomotive death-trap, we are continually asking ourselves "How will the hero get out of this one?"

A few years ago when he was promoting his new book MISTER SLAUGHTER, I had the opportunity to meet Robert McCammon at a book signing in Ann Arbor (see earlier posts).  During the Q&A I asked him if he would ever consider writing a sequel to THE WOLF'S HOUR.  His reponse was the tease of, "A sequel...no.  However, I do think the character has several shorter stories worth telling."  Well, that got me pumped up and the wait began.

Luckily the wait is partially over...see you tomorrow for Part 2 on this topic.
Posted by Barrel Jumper No comments: