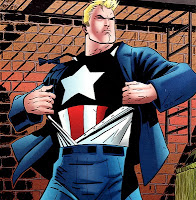 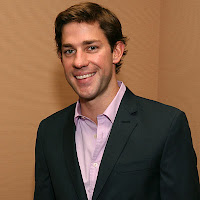 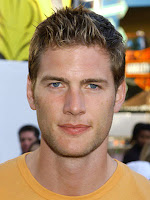 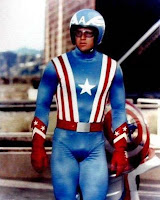 odern times.
Fans always cry: MAKE MINE MARVEL!
Well, MAKE MINE McPARTLIN!
I'm attaching this picture of Reb Brown as Captain America for added entertainment value. That shield needs to be blocking something else besides bullets.
Posted by Barrel Jumper No comments:

THE WOLFMAN (an "I Saw It" Review)

“I will kill all of you!” – Lawrence Talbot

So, I caught The Wolfman last weekend. I’ll save the typical synopsis and Hollywood jargon which you can find on plenty of other websites. For my two cents I’ll just try and focus on what worked for me. And, YES I enjoyed the movie.

The Wolfman was an entertaining horror movie that made no allusions to being anything except a horror movie set in historical times. The sets and pacing feel

very much like the classic Universal monster movies of the 1940’s. I loved this. No quick edits, modern music, insider jokes, changes to the legend, etc…the movie stays simple to the premise…man is cursed and changes into a monster when the moon is full and if you’re going to kill it – think silver. Another bonus is that when The Wolfman does show up on screen it’s a fair exchange between CGI, practical F/X, and Benicio Del Toro (who I am not a fan of but did connect with in this movie) in full make-up. That alone gets a huge thumbs up from me! Too many movies toss CGI monsters at the viewer which clearly live in a world separate from the actors. There’s Gollum (which worked) and then there’s pretty much every other CGI-offering that Hollywood has produced…which don’t resonate with 100% realism. There’s something to be said about the simplicity of an actual made-up monster stalking characters. It adds a sense of true physical danger to the proceedings.

Speaking of the danger, violence is another avenue to the movie that I enjoyed and appreciated. If a man turns into a monster then you’d assume that there is no bargaining or reasoning with the beast. In this movie you’d be assuming correctly. Limbs and heads are severed faster than you can blink. I know I saw one disemboweling and one liver being eaten. And I saw lots of characters screaming and begging for their lives. Fat chance…you’d have better luck trying to broker a deal with the shark in Jaws. This Wolfman is all about the fast hunt and the blood kill…as an animal should be.

I’m a huge fan of the original Lon Chaney, Jr. Wolfman movies so it was also a pleasant surprise that the makers of the new movie didn’t try for too much of a remake and also didn’t err on the side of being too different. The key elements all are here: father-son dynamic, romance, prodigal son returning home, gypsies, curse, wolf, transformation, opening poem, and plenty of monster to behold. The changes incorporated all add a strong new life to the movie and concept. Of particular note is: the asylum transformation which takes place in front of a crowded viewing room, a chase through and over London, and a third act swerve that provides some motivation for Lawrence Talbot beyond, “I need to rid myself of this curse.”

I had read a lot about The Wolfman over the past several years. Normally this amount of production trouble results in a real stinker of a final movie. I was amazed that the end film came out as thrilling and entertaining as it did. For only being the second movie I have seen in 2010 (the first was Avatar)…the year’s looking real good.
Posted by Barrel Jumper No comments:

It's SuperBowl weekend (and February weather in MI) so the odds of me needing to go outside for anything are pretty much NONE. 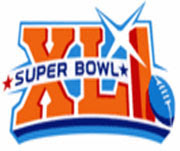 That said, I've got plenty to entertain me for the next 48 hours so traveling outside for some fresh air isn't really necessary.

TV: The SuperBowl!!! Have to root for the Colts and my favorite player Peyton Manning in this one. Nothing against the Saints (and if they do win that's fine too), but if Manning earns his 2nd SuperBowl ring then he's pretty much a lock for the greatest QB ever. Watch the man play...it's amazing! btw - Prop Bet on HEADS to win!

DVR: The shows are piling up. Me and Mrs. Jumper are all caught up on our favorites like Lost, 24, Big Love, Modern Family, and The Big Bang Theory...but that still leaves tons of shows we enjoy like The Mentalist, The Office, Chuck, Chopped, Lie to Me, Man vs. Wild, and several others that we're "testing out" like The Human Target. If you don't watch these shows...then you're missing out on some excellent TV.

BOOKS: I just finished the 4th DIARY OF A WIMPY KID (Dog

Days). Hilarious! They're written for a younger audience but much like the Warner cartoons of old, there's plenty of subtle jokes for adults that are just great. This book is one of the best and had me laughing out loud at several spots.

COMICS: I have to get up to Liberty Comics soon but until then I have some issues of Captain America, Green Lantern, and The Flash that I need to catch up with.

GAMES: I just bought STAR TREK online and...well there goes my weekend as I command the U.S.S. Damacles to new and exciting worlds...and boldly go where no genre enthusiast has gone before.

Enjoy your weekend!
Posted by Barrel Jumper No comments: