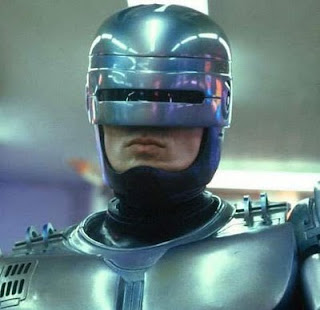 In 1987 when I saw Robocop…it blew my mind. This was the same summer that I paid my own hard-earned money for movies like Jaws IV: The Revenge and Superman IV: The Quest for Peace and was introduced to the concept of EPIC FAIL. Then along came Robocop. The poster looked lame. The title sounded cheesy. The previews were lacking. Still, one evening my friend Mike and I had little else to do so we climbed into my ’78 Buick Regal and headed over to the Southgate 4…for what turned out to be one of the best movies I saw that summer (maybe of the 1980’s).

I’m not giving a summary, I mean if you’ve never seen Robocop then stop reading this immediately and go rectify this situation. But the key points we need to know for this blog are: the movie takes place in Detroit (or rather “Old Detroit”), it focuses on a crime ridden city and an over-whelmed police force that both end up getting a shot from the new technology that melds dead officer Alex Murphy with Omni Consumer Products super cyborg. The sheer level of action and violence that follows is incredible.

Robocop had three prime directives:
1) Serve the public trust
2) Protect the innocent
3) Uphold the law
How great is that!

So here we are in 2011 and I’m writing about Robocop. Why? Well it turns out some jokey tweets lead to a movement for some sci-fi fans to erect a statue of Robocop near the police station in downtown Detroit. The idea was immediately turned down by Detroit Mayor Dave Bing. However, the fans got an online petition going, found some private property and managed to collect $50,000…that’s all they needed and now ROBOCOP will stand tall in Detroit.

I love this idea. I don’t think it’s the “joke” that some naysayers do. Robocop is a great movie. Robocop is a police officer protecting the city of Detroit. Doesn’t he represent three excellent traits? If Rocky stands for the “never give up” quality that Philadelphia fans love so much (and he got his statue in Rocky III that is still standing today), then why not Robo?

If the statue does get built, I hope the trend continues. How cool would it be to see a huge Snake Plissken statue standing up in New York City...and then in L.A...and for the purists...Cleveland!
Posted by Barrel Jumper