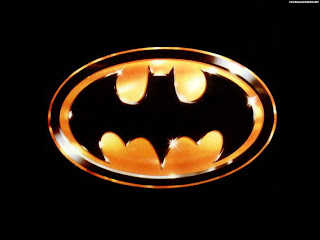 With all the hype about The Dark Knight Rises this summer, and the fact that I have been toiling away determing my Top 10 superhero movies of all time, it seemed like an appropriate time to revisit the first two entries into the Batman franchise.  Aside from brief glimpses on TV, I haven't seen Batman or Batman Returns in at least 10-15 years.  To help put this in perspective, when I went looking for both movies I didn't even have them on DVD.  Down in the basement in a dusty old VHS cabinet is where both movies were residing.  I promptly placed Batman into my VCR and was instantly greeted with a Diet Coke commerical.  Talk about a flashback to the 90's!  Mind you this was NOT a bootleg copy.  I purchased my VHS tape from Suncoast for $19.95 or so when it was released and part of that low cost at the time was helped by Coke putting a commercial at the start of the movie.  Grrrr!  I hate commercials which is why (unlike Mrs. Jumper) I never watch movies on commercial TV.  Thankfully Batman Returns didn't repeat this blunder although the movie was a blunder unto itself.  In watching both movies I was thankful for technology and the advent of DVD and HDTV because VHS images stink!  I had to stop Batman 15 minutes into the movie and move my TV to run a new cord hooking up my VCR in a better manner to try and milk just a slightly better picture quality.

I have no intentions of providing any form of story synopsis for either movie.  If you haven't seen them, stop reading and earn your "genre-enthusiast credentials" and go watch them...and then return.

During the summer of 1989 I worked at a movie theatre and had the pleasure of seeing Batman some thirty or more times.  In fact the joys of being a theatre employee meant I saw the movie a day before the masses.  The added bonus was my good friend was the projectionist so he hooked the movie up so that both he and I had an entire theatre to watch it alone (kind of like a giant living room) while the rest of the employees were all drunk and rowdy somewhere else.  Batman did it's job.  It returned respect and greatness to the superhero franchise, something that had been utterly destroyed because of Superman III and Superman IV: The Quest for Peace.  Audiences and expecatations were sky high for Batman and the movie solidly delivered.  Even today watching it on my lousy VHS copy, I was entertained.

Batman gets alot right.  The look of Gotham City is solid.  Keaton's Batman is great (one of the best to date...and to think how the fanboys were up-in-arms about his casting).  Nicholson's Joker is stellar (and although I prefer the creep factor of Ledger's) and it feels like he's come directly from the comic books.  The Joker is spooky and yet funny.  I had forgotten some of his solid lines so even in 2012 they managed to coax and smile or guffaw out of me.  The joy-buzzer scorching of rival mobster Torreli has always been a treat.  The origin stories for both Batman and Joker are well delivered.  Batman is allowed to do action, use detective skills, show off technology, and basically be a cool hero in a cool movie.  My grade for Batman back in 1989 was a solid "A+".  Today I'd rank it a solid "A-" (but it's still not cracking my Top 10 Hero Flicks of all time).

The only real issues I have with 1989's Batman are the characters of Alexander Knox and Vicki Vale.  Knox (or more appropriately Robery Wuhl) is just annoying.  Nothing made me happier than when he was written out of any sequels.  Vicki Vale is shallow, goes immediately for millionaire Bruce Wayne and spend far too much time screaming or "oohing"...I lost count around twenty times!  My other main issue with the movie is the sets.  Clearly Gotham City is on a soundstage.  No matter how scenes are filmed...it feels tight.  The Batmobile drives by the same locales too often and there are times where I felt clautrophobia.  There's something to be said about taking the time to film scenes outside...it adds dimension.  Finally, even though Batman looks cool...watching it today you can see how heavy and clunky that costume is.  No way is anyone fighting crime wearing that cumbersome outfit. 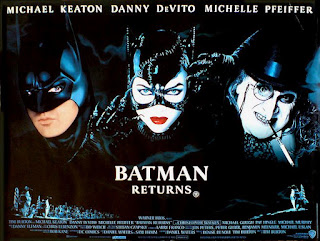 In 1992 Batman Returns hit theatres.  The posters hyping the movie were awful but the previews helped build up excitement.  By this time I was a paying customer so no more free rides or multiple viewings.  I hated the movie!  Even after numerous rewatches the film should really be called BATMAN: FIGHTS FOR SCREEN TIME.  The movie is a mess with far too many villains and none with any form of coherent plans.  The Penguin looks decent but his storyline is a muddled mess.  The character of Max Schreck takes up far too much of the story and truly only exists to combine the plotlines of Penguin and Catwoman.  As much as people still swoon over Michelle Pffeifer's portrayal as Selina Kyle and Catwoman...I don't get it.  The costume is silly, her lines are atrocious...OK she can swing a mean whip...but that's about it.

The only real plus with Batman Returns is that Tim Burton progressed as a director.  The camera is more fluid which makes all of the action sequences more interesting.  Batman is allowed to do more in his fights/chases as well...and the suit seems a bit more mobile (sorta).

Of course with the one plus out of the way, the rest is all negative.  The sets issues are still present as Gotham City feels more confined than ever and we don't even get one or two landscape shots to show us what the place looks like as a whole.  The lines that the characters delivers are horrible!  Everyone is fighting to have a funny quip, even Batman - "Eat floor!  High fiber!"  It gets exhausting to listen to, much like reading a Dan Slott comic book where the only motivation for every character is to be funnier than the previous character.  When this happens there is no gravity to the plot or world that the characters engage in.  An hour into watching Batman Returns I felt my patience dying off...by the end I was thankful when the credits rolled.  And before I'm labeled a "hater" let me say that I wanted to like this movie!  Every time I see it and Keaton first stands up in front of the Bat-Signal, I'm ready to be taken on a thrill ride...unfortunately much like the Penguin's self-built Batmobile Ride, this ride only makes me sick to my stomach.  My grade for Batman Returns back in 1992 was a "C-".  Today I would rank this movie an "F"...but since I know Batman & Robin is still around the corner I'll push it up to a "D".
Posted by Barrel Jumper