Faster than a speeding bullet we’re back to the countdown with the best theatrical offerings that DC Comics have ever produced! 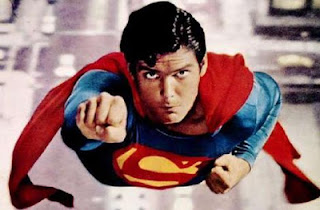 In today’s era of multiple superhero movies each year, it’s hard to remember back to 1978 which gave us SUPERMAN: THE MOVIE…then the eleven years before Tim Burton’s first Batman offering.  Two superhero movies in spanning all that time.  Yes, I know there were three Superman sequels…but they all suck.


People who have fond memories of Superman II should rewatch it to realize that it doesn’t hold up.  Richard Lester’s ham-handed comedic directing (with fired director Richard Donner’s material) doesn’t work for anyone over 10 years old.  The special effects are weak…seriously who can’t tell that those are flying dolls traveling through a miniaturized set?  And the climactic fight(s)?  Well, one of them involves Superman introducing a bunch of new hokey powers: cartoon throwaway shield, zero-gravity hand ray, and the power of illusion!  Then of course the earlier fight in the city of which involves the most over extended sequence wear the citizens of Metropolis, all of whom are so annoying that I was routing for their subjugation to Zod, are being blown around town and laughing and having a meery good time.  What a horrendous movie.  And for all its hype, the Richard Donner cut…suffers as well for other reasons.  Of course, both versions of Superman II don’t have Richard Pryor or Nuclear Man…so in that regard they are successes. 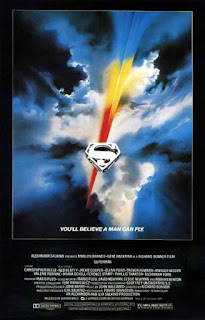 However, two years before all the horrible Superman sequels, 1978 brought us an incredible superhero movie that truly made audiences believe that a man could fly.  And wow did flying look fun!  The casting of every character in Superman: The Movie is perfect!  I’ll argue that no other superhero movie has succeeded so solidly in both casting, costumes, and general sets appearance.  Metropolis is !  Luthor is a fiendish villain with a great plan!  And Superman is…SUPER!

Considering how much material Richard Donner needs to cover, the pacing of this movie is fantastic.  The first hour gives us the destruction of Krypton, Jor-El’s reasoning for sending his only son to Earth, the villains of the Phantom Zone, young Kal-El’s landing on Earth, life in Smallville, the death of Pa Kent and his message (thank you Glenn Ford for 10 minutes of a movie that still resonate with such power decades later), the construction of the Fortress of Solitude, and the introduction of Metropolis!  Wow!  Amazing!  I know people are holding out hope for Zac Snyder’s Man of Steel…but man, that’s a lot of work to live up to.

Superman: The Movie also delivers a 10-minute sequence that still rocks today.  Superman’s first night in Metropolis: saving Lois Lane, catching a helicopter, thwarting a jewel thief, stopping a bank robbery, saving a cat, and rescuing a crashing Air Force One.  Great cinematic stuff!  If I’m ever channel surfing and this segment is even close to airing, I always stop to watch and am never disappointed.


Watch the movie HEAT with Al Pacino and Robert DeNiro, and then watch The Dark Knight!  Both are the top films of the cop-criminal and hero-villain genres…and I’d argue that the one with the masks and capes is a better effort and I love HEAT. 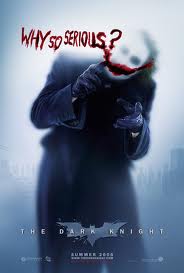 Christopher Nolan knocks an utter grand slam with his second dive into the world of Batman.  The studios were so confident with Nolan that the movie didn’t even need to have Batman’s name in the title!  There are so many levels taking place in The Dark Knight that it’s easy to lose sight of the social and political commentary and just focus on Batman chasing the Joker and Two-Face.  But go back and rewatch the movie and you’ll see it’s filled to the brim with topics for discussion.


Anyone who hopes to write or a direct a superhero movie needs to watch and learn how Nolan manages to succeed in handling two supervillains (and never loses site of his hero).  So many other films have tried and failed when it comes to the use of multiple enemies for the hero, The Dark Knight is the primer for great implementation.  First, the Joker is shown simply as a force of nature.  He’s the shark from Jaws.  You don’t know why he arrived and why he does the things he does.  You don’t need that information.  All you need to know is when he is on screen really bad things are going to happen – and you’ll be captivated the entire time.  His persona is summed up perfectly as Alfred explains to Bruce Wayne, “Some men aren't looking for anything logical, like money. They can't be bought, bullied, reasoned, or negotiated with. Some men just want to watch the world burn." Then there’s Harvey Dent’s fall from grace and emergence as Two-Face.   Powerful stuff with incredibly gross CGI that is too realistic for its own good.  With these two villains, you fear for Batman and every single person in . 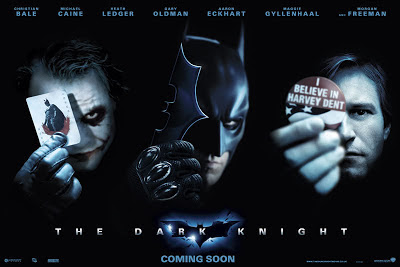 The success of The Dark Knight is that it stays down to Earth on such a grim and gritty level that while watching a movie where people wear costumes, you can actually find yourself thinking, “If superheroes exist, this is what it would be like.”  At times it’s almost too dark.  Often people I talk to say the reason they don’t like The Dark Knight is because they want their Batman more family friendly and cartoony.  This is why I love The Dark Knight.  Because we’ve already had umpteen versions of Batman as a comic book character from comics, to cartoons, to the 1960’s TV show, to the movies.  It’s easy to lose site that Chris Nolan is the first one to give us a truly grim visage of what life behind a mask can do to both a person and the city is strives to protect.  It’s not pretty but it’s damn original and entertaining!


The Dark Knight is one helluva reward!

Had my Top 10 list been written three years ago, Superman: The Movie and The Dark Knight would have been ranked #3 and #2 respectively.  Just shows that in the last few years a couple of movies have come out that really shined a powerful light on the superhero genre from comics to movies.