The #1 movie superhero movie of all time!  If your list differs, then you are wrong!


When I was a child my friend and I used to sit around watching movies and discussing how awesome it would be if one day there was an Avengers movie with all the heavy hitters: Captain , Iron Man, Thor, and Hawkeye and maybe they would even fight the Hulk.  That was in the 1980s.  2013 and Joss Whedon and Marvel delivered exactly what I wanted and needed in a superhero movie.

I have seen Avengers eight times at the movies in IMAX, in 3D, attached to a Thor 1 & 2 marathon, and in the company of numerous friends (heck my wife even saw it twice in the theatre, unheard of for her).  Each and every time it was a memorable moment and an absolute fun experience.  So let’s look at ten (and there could be more) key reasons why Avengers succeeds for me as a superhero fan where so many other superhero movies before and since have stumbled.


1) THE LOOK!  If you look at a comic book of the Avengers (especially Ultimates’ version) and then look at this movie, there is no doubt what characters you are following.  Even though Captain has some mask issues, the movie owns it and explains that Agent Coulson designed the suit, so sure maybe it’s not 100% perfect.  “Aren’t the stars and stripes a bit outdated?”  There are no bat-nipples or unnecessary suits of armor-mesh or dark tones.  Samuel Jackson’s Nick Fury is exactly as Ultimates’ writer Mark Millar always envisioned him.  Loki’s horned antler helmet is straight out of 1960s comic books, and kudos for that where other studios would have balked and requested that the look of the helmet be changed. 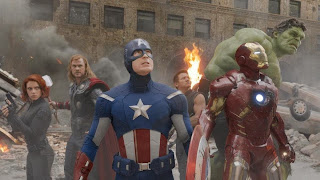 2)  THE CAST!  Sure Robert Downey Jr. owns every scene he is in, but this movie allows everyone to shine.  This is not Iron Man & The Avengers (as every X-Men movie with Wolverine turned into).  There are some stellar casting choices I especially love Chris Evans remaining stoic and yet out-of-time with his Steve Rogers but once the costume is on he is all patriotic hero and commander.  Mark Ruffalo (who I was not eager about the casting choice) brings a nice awkward touch to Bruce Banner and then his Hulk manages to take over the spotlight of the entire movie (seriously when people talk about this movie do they NOT talk about Hulk first?).  Even Jeremy Renner who is tragically underused is a great casting choice for Hawkeye.  “I suppose if I shoot an arrow into Loki’s eye I’ll feel better.”  Nobody can do cocky and funny like Renner so I’m hopeful that future movies can do him and the character justice (go watch the movie S.W.A.T. and see Renner as the pompous bad guy…that’s pure Hawkeye). 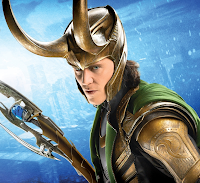 3)  THE BAD GUY!  “I am Loki, and I am burdened with glorious purpose.”  The first issue of the Avengers comic book featured Loki as the villain.  Kudos for the movie to follow suit…and boy did they.  The Loki present in this movie is NOT the weak-kneed unsure Loki from the Thor movie.  From his first appearance Loki is a powerful threat in this movie and it is clear a team will be needed to stop him.  His dialogue is excellent whether he his trading quips with his brother Thor or Tony Stark, being pummeled by Hulk, tricked by Black Widow, or killing S.H.I.E.L.D. Agents, when Loki is on screen you have no choice but to follow his every action and wait with anticipation for the team to form and battle him.  Tom Hiddleston owns this character and continued to win fans over with his appearance at SDCC in 2013 as well as stealing every moment in Thor the Dark World. 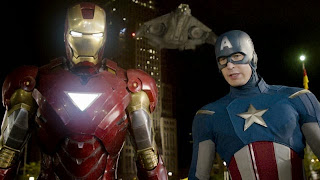 4)  HERO VS. HERO!  Who would win in a fight between Thor and Iron Man?  Can Captain ’s shield stop Thor’s hammer?  Is the Hulk strong enough to lift Thor’s hammer?  These are fan boy questions over the years and Joss Whedon made sure that each of these questions and more would be presented and answered during the course of the movie.  Origin stories can be a dull affair, but with a superteam there is always the necessity of having the good guys battle each other in some manner.  “I have a plan.  Attack.” and with those words Iron Man engages in a battle with Thor that had fans of the comics and movies eager to witness.

5)  “And HULK…SMASH!”  I am a fan of the movie The Incredible Hulk and I was glad that at the least mentions of it were included to be sure it was treated as canon for this cinematic   I thought Edward Norton did a solid job and the Hulk’s ending battle with the Abomination was great.  Then the Avengers reintroduced the Bruce Banner and the Hulk and upped the game to an incredible (no pun intended) new level.  It was a masterstroke to sit on Hulk’s reveal until late into the 2nd act of the movie.  By this point, everyone knew what to expect but Joss Whedon still managed to create a level of suspense as Hulk chased Black Widow through the lower levels of the SHIELD helicarrier.  When Thor makes the save, there’s a great moment where even he wonders if he has bit off more than he can chew.  In the climax when Hulk is turned loose by Captain to wreck havoc on the Chitauri invasion…you almost feel sorry for the aliens because they don’t have a chance. 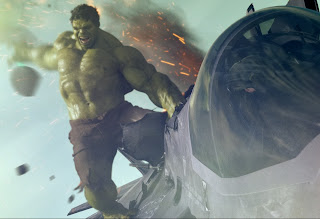 
6)  UNIVERSALLY PLAYING FAIR!  In many sequels or sagas there’s always the need to cheat things a bit to help get everyone exactly where they need to be.  In the Avengers Joss Whedon stays 100% true to all of the previous movies and characters that have already been put into play.  Whether it is a few seconds of flashback as Captain thinks back on his adventures in WWII or Bruce Banner saying, “The last time I was in , I sort of broke….”  These moments are faithful to movies made by other writers and directors and Whedon does not try and alter things.  This shows you how deft Joss Whedon is as both writer and director because not only did he not have a hand in these earlier movies, but he builds on each character’s storylines throughout the course of the movie.


7)  CHARACTER MOMENTS!  There are a ton of characters in this movie and each of them have their moments to shine in dialogue and exchanges.  Loki and Thor have two short moments that speak volumes both atop a lonely mountain and at when the battle is starting.  It is clear Thor still loves his brother and is desperate for Loki to return to the side of good.  When Captain first meets Bruce Banner and respectfully explains that the only word he cares about is Banner’s expertise with locating gamma radiation.  This short moment is the whole reason the Hulk later shows respect for Captain .  Black Widow’s ability to toy with a Russian general and a god of Asgard with such ease that even the audience is caught off guard.  Tony Stark’s lack of respect for SHIELD, “That man is playing Galaga,” slowly changes as he learns to grow and become a team player. 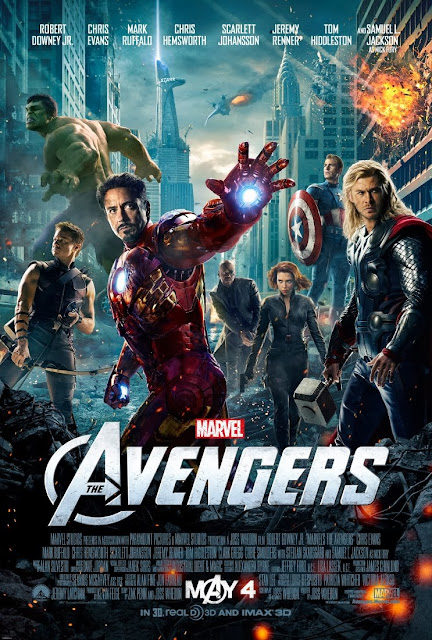 8)  ACTION PACKED FINALE!  If you are going to make a superhero movie, there has to be an action packed finale.  The Avengers creates a 30 minute war on and above that sets the bar high for any movies that follow.  Throughout the course of the action we are provided with moments of levity in dialogue, “You and I remember very differently,” and in action when Hulk sucker punches Thor.  There are explosions, nukes, space, monsters, and the rescue of innocent bystanders, “Captain saved my life.”  All six members of the Avengers have numerous moments to shine as equals.  You believe that this is a team.


9)  THE SEQUEL!  Avengers concludes by playing the groundwork for this super team while allowing each character to travel their separate ways into other movies.  There’s a simple teaser shot of Thanos to remind us that there is a much larger universe in play, "To challenge them is to court death."  But a movie truly succeeds  After Avengers, Iron Man 3 and Thor The Dark World both delivered larger box office totals than the previous films in each of their respective franchises.  This is because fans want more.  Viewers want to experience that rush of excitement that comes with a stellar movie like Avengers.  Marvel was wise to acknowledge this and be sure that Joss Whedon was brought back with control as both writer and director for the sequel.  We know it will be called Avengers: Age of Ultron, and I cannot wait to see this sequel repeatedly in the summer of 2015!
is when the audience wants to spend more time with these characters and their adventures.


10)  THE ICONIC SHOT!  I have the poster for Avengers framed in my man cave.  Not because it is a great poster, in fact I think it’s a fairly weak Photoshop effort.  The poster is framed because in that one moment you see all of the key characters working together, standing heroic in a war torn NYC.  At the start of the Chitauri inv  There is no dialogue needed nor action.  The heroes merely stand poised and ready for combat to defend our planet.  Here they are Earth’s Mightiest Heroes.  In a movie with nothing but greatness, that stands out as my favorite shot of the movie.  Early into the invasion, there is one scene where the camera swoops in and does a 360 spiral around the Avengers and that moment almost brings a tear to my eye and definitely brings a smile to my face.

This wraps up my personal Top 10 countdown of superhero movies.  While my opinion may change over time, over the past 12 months (far too long for me to write this list…sorry but I was working and writing books at the same time) my views on these entries has not changed…although Kick Ass 2 and The Wolverine tried very hard to crack into the Top 10…but I’ll cover that when I look back at the best movies of 2013.  Next time.
Posted by Barrel Jumper