Death Sports and THE HUNGER GAMES 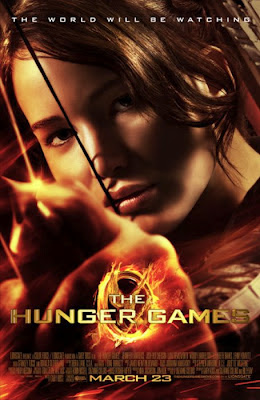 So, The Hunger Games is the latest book to "catch fire" amongst teen readers and then spread into the must read territory for adults.  The movie is surely going to add to the fervor as well (to which movie theatres across the country are singing praises - I've never seen so many smiling faces of theatre employees in my life).  I've read the book and I've seen the movie.  Both are quite well done...but in the end they don't add anything new to the Death Sport category of science fiction.  Ok, The Hunger Games adds a Twilight-esque love triangle...but beyond that it's simple.  There's a government demanded game in which contestants kill other contestants and only the winner will survive.

My favorite book of all time is Stephen King's (writing as Richard Bachman) THE LONG WALK. It is an incredible work that plunges the reader into a harrowing death sport of long distance pace-walking. Sounds simple and dull and yet...the journey is so powerful that you can feel the agony of every bloody step and each deadly bullet right along with the 100 contestants who are forced to endure the sport of the nation. My original review on Amazon: 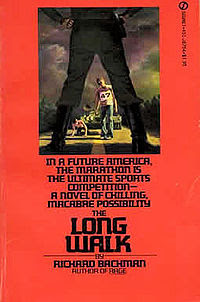 I find it ironic that perhaps Stephen King's greatest story is written under his pseudonym and also one of the books few people have heard about. It's arguably my favorite novel - ever - and also holds the distinction of the book I have read the most (and the only story that has made me physically ill).

The Long Walk is a superb sci-fi story that pits 100 teen boys against each other in a seemingly never-ending marathon death sport. How exciting can the act of walking be? VERY! King masterfully unfolds a story with three-dimensional characters and an intricate duality about the nature of death between the contestants and the audience who cheers every step on their march.

Fans of the genre may also like to read the Japanese cult novel BATTLE ROYALE which takes a distinctly different (and more extreme) take on child death sports. For anyone reading this novel for the first time, I'm envious...enjoy the walk.

King also mined the death sport genre for another book THE RUNNING MAN which took a similar stance of a mind-numbed society being controlled by the government's need for brutal sport.  This lead to the 1980's Schwarzennegger movie under the same title (and that's the only thing the two stories have in common).  The movie was hailed as pretty much the death of the 80's action genre, complete with an overindulgence of one liners when a villain was dispatched ("Ah, he was a real pain in the neck!").  Japanese author Koushun Takami's book BATTLE ROYALE is a take on death sports being played out amongst teenagers by a fascist government.  The novel is outstanding and delves deeply into the lives and backgrounds of the majority of teens forced to compete on a remote island.  If you haven't read or seen the movie both are now readily available in the US.  All three of the novels I mentioned stand high on the list of the deathsport genre and should be sought out by anyone who enjoys the premise of The Hunger Games.

Back to THE HUNGER GAMES, the story doesn't add anything new to the genre all of the familiar deathsport elements are present: fascist government, contestants forced to play, rules change, one survivor, violent deaths...checks all around.  I think one of the reasons the story has taken off is because for once a female has been planted into the lead role and Katniss Everdeen is a strong protagonist.  The story doesn't pull punches either...there is death...and Katniss plays a hand in the killing.  As with any book that pulls in young readers there is a camp of whiners out there jonesing to spoil the fun by chastising the violence and saying that it is not appropriate for teens.  These are the kind of "pro-readers" who only want you to read what they enjoy.  Ignore that camp!  While you won't find anything too original in the story, you will find a solid amount of entertainment.  As with all books, the novel is stronger and allows for a better overall development of situations.  The movie though comes in a close second and only has minor stumbles of pacing in the setup and in the finale, but it'll be a well earned blockbuster and I'm sure the sequel is right around the corner.